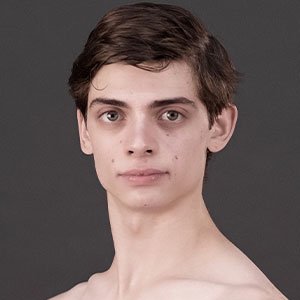 Levian Mondville began dancing at the age of 9 at his family’s dance studio in Fairport Harbor, Ohio. There he discovered a love for movement and its many styles including ballet, tap, jazz, modern, and contemporary. Upon deciding to make a career out of performing ballet, he started high school at Cleveland School of the Arts, training there with Erich Yetter, Imani Jackson, and Kay Eichman. During that time he went to summer intensives at the Student Honor Intensive Program at the University of Buffalo, Cincinnati Ballet, Central Pennsylvania Youth Ballet, and Houston Ballet Academy. He also performed with Ashland Regional Ballet as their Nutcracker Prince and with Ballet Excel Ohio as Prince Tamino in their Magic Flute. After receiving an invitation to train year-round with the Houston Ballet Academy in 2018, he moved to Houston and ﬁnished his last year of high school. There he learned from Claudio Muñoz, Kelly Myernik, and Melissa Bowman. He then trained virtually with Texas Ballet Theater’s Studio Training Company under Ben Stevenson, Kathy Warakomsky, and Leticia Oliveira. Most recently, Levian joined Cleveland Ballet in 2021.