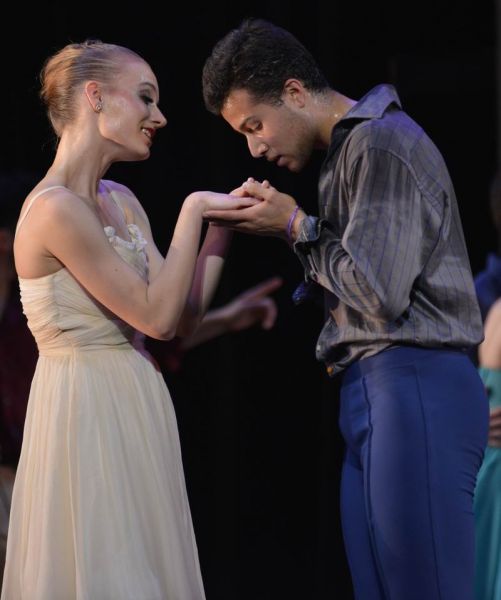 Cleveland history was made this past weekend as Ballet was once again performed on Playhouse Square by the local Cleveland Ballet Company. It was also a chance for those attending the three performances to catch a glimpse of the nearly restored Ohio Theatre Lobby. The two have quite a lot in common.

While the lobby is nearly 98% near completion there is still some work that needs to be done in order to make the Versailles like opulence truly perfect. The same can be said concerning the performance of the ballet Coppelia as performed by Cleveland Ballet.

Fantastic dancing performances were achieved by the principles that included Ramón Oiler (Dr. Coppélius), Elena Cvetkovich (Coppelia Doll), Laren Stenroos (Swanilda) and Nicholás Montero (Franz) making for a nearly perfect show. The weakness of the show (the 2%) falls to the Corp de Ballet which seemed plagued with a few step outs and slight lack of synchronization (especially in the performance of the coordinated ensemble leaps). The one exception to this was Victor Jarvis (Best Man) whose vibrant display of athletic prowess delighted the audience.

Tremendous praise goes out to Artistic Director Gladisa Guadeloupe and Choreographer Ramón Oiler as well as the dancers and terrific staff at Cleveland Ballet for restaging this work that was a mainstay of the original Cleveland Ballet back in the '80s and '90s. Bringing together nearly forty dancers together to perform a complex work such as Coppelia is no easy task and all should be congratulated for their efforts.

Considering the short rehearsal time coupled with the gathering of various dancers from around the country it was still a wonderful example of classical ballet. Add to this the fact that in the future, Cleveland Ballet’s goal is to form a solid core company that will see these minute problems quickly vanish.

The important thing to remember is that this is the first Cleveland produced ballet since the turn of the century and it is time for the supporters of fine arts in Cleveland to step forward and open up their hearts and wallets. No fine arts organization, be it dance or theater, can survive on the strength of ticket sales. Grants, donations, and corporate support are needed in order to see the steady return of performances such as was witnessed this past weekend.

Not wishing to rest on their laurels, Cleveland Ballet has a number of performances scheduled for the 2016-2017 season that includes The Dance Showcase in the Connor Palace at Playhouse Square on September 9, 2016 as part of the Playhouse Square Block Party. This is followed by A Celebration of Dance Repertoire that will feature Alexandra Perucil and the Cleveland Orchestra at the Ohio Theatre at Playhouse Square on October 10 and 11, 2016. The annual Black and White Gala will be held during the winter months (date and time to be announced). There are also plans for an International Tour in March of 2017 and on April 5 through 7, 2017 Cleveland Ballet plans to return to the Ohio Theatre for their production of the ballet “A Midsummer Night’s Dream.”